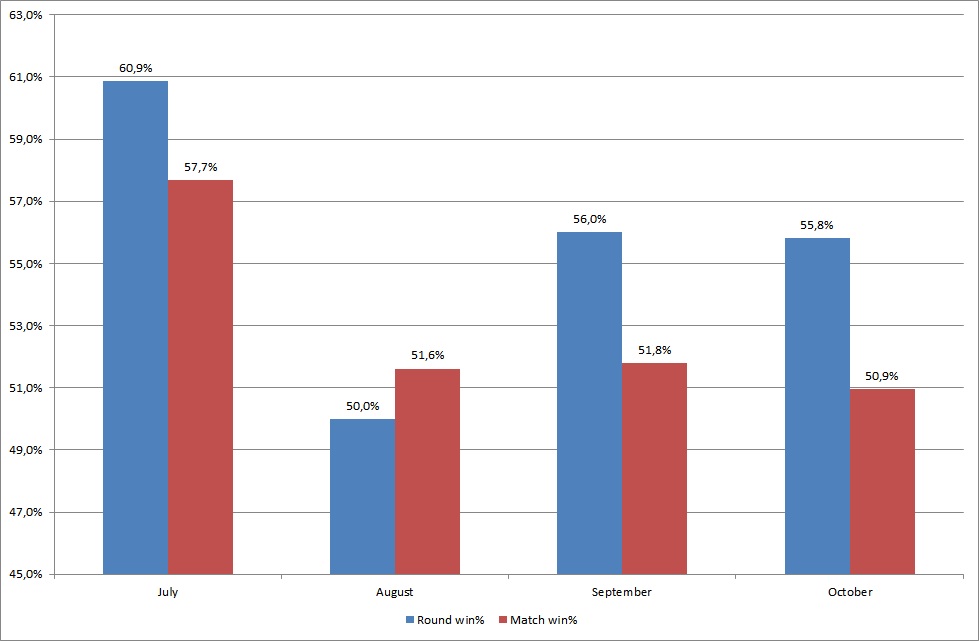 Once again I tallied up the score for events played. This time it’s the August numbers, and that was not one of my better performances.

The numbers from August where:

No events won, which is ok. I never participate in an event, and expect to win it. If I win it is just a nice surprise, since it drastically improves my Expected Value of the event. But losing more than half my rounds really gave food for thought. This ties into the statistics on the color distribution, but more on that later.

I also did some statistics on the deck color distribution and their individual win rates:

First off, the sample size on each color is relatively small, which makes any conclusions based on this quite uncertain. The numbers for blue (which is from alive draft) and BG are quite ok, but the WG combination just fell through for me. When I read Matt Costas article on how Team Pantheon dissected the M15 draft format, it gave me a wealth of information I wanted to try out, but I think I may have screwed up somewhere along the way. I think, and this is where I second guess myself, that I may have been forcing the Selesnya decks too much. This may be based off an assumption that they’d come through more often than not. I could have been building them wrong or just misevaluated their power level in general, but the fact of the matter is that I lost far more with those, than with any of the others. Of course I didn’t play much else 😉

Another thing I noticed is that my mood is directly linked to my win percentage in an event. This is something that I really need to work on, since no game should be worth getting pissed over.

– Don’t force too much. Look at all options a second time

– It’s not important to win, but to improve.

Until next time, take care 🙂

It’s been a while since my last post. A little too long not to have something new to write about 😀

At the beginning of July I started taking notes on how my performance was on MTGO. At the time I was playing only Phantom Sealed Theros Block events. I was doing ok, since my goal was to win more rounds and matches than I lost.

The numbers from July where:

That at least shows me that I accomplished my aforementioned goal 🙂

I also did some statistics on the deck color distribution and their individual win rates:

The sample size may be too small to be able say anything conclusive about, but it does shed some light on how I’m performing. M15 has already been released and I’ll continue keeping track of the events I play.

Until next time, may your mana curve be smooth and efficient 😉

This is a follow up on my previous post. The PTQ in Aarhus is over and I feel it’s time to look back on how things shaped out for me.

With unlimited time and the intellect of a genius I guess anythings possible. Unfortunately I had neither, although I think less could have put me at the top.  In the end the result was not a ticket to the Pro Tour, since I went 4-4 on the day of the PTQ. The final result put me at a 49th place out of a 150 participants.

The pool contained the cards below. To begin with I built a midrange RB deck, but after losing my first three matches, I asked a friend and went into aggro. That helped 🙂

The final deck contained the following

1 Lash of the Whip

2 Rise to the Challenge

1 Siren of the Fanged Coast

1 Chorus of the Tides

1 Weight of the Underworld

1 Lost in a Labyrinth

When looking back I think I made a mistake when I constructed my deck. The cards to take it towards aggro where there, but I missed it and went into some midrange solution. The deck tried to do two different things, which I’m not interested in in general. I believe that the more uniform a decks plan is, the better it will perform.